Continuing in our RDA vein, we’re here to review the Hellboy RDA today.

First off, this is a dual coil RDA with four post holes. Comes with ‘flavor tip’ or ‘cloud chasing tip’. The former is stainless apparently or aluminum, and the latter is of Delrin.

So, here’s a picture of it to show you what it looks like. 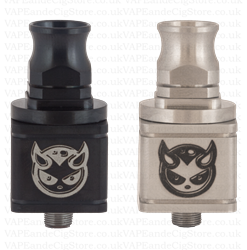 Those are with the ‘flavor tip’ installed. Here’s a shot of it on my IPV 4S with the ‘cloud-chasing’ tip on it: 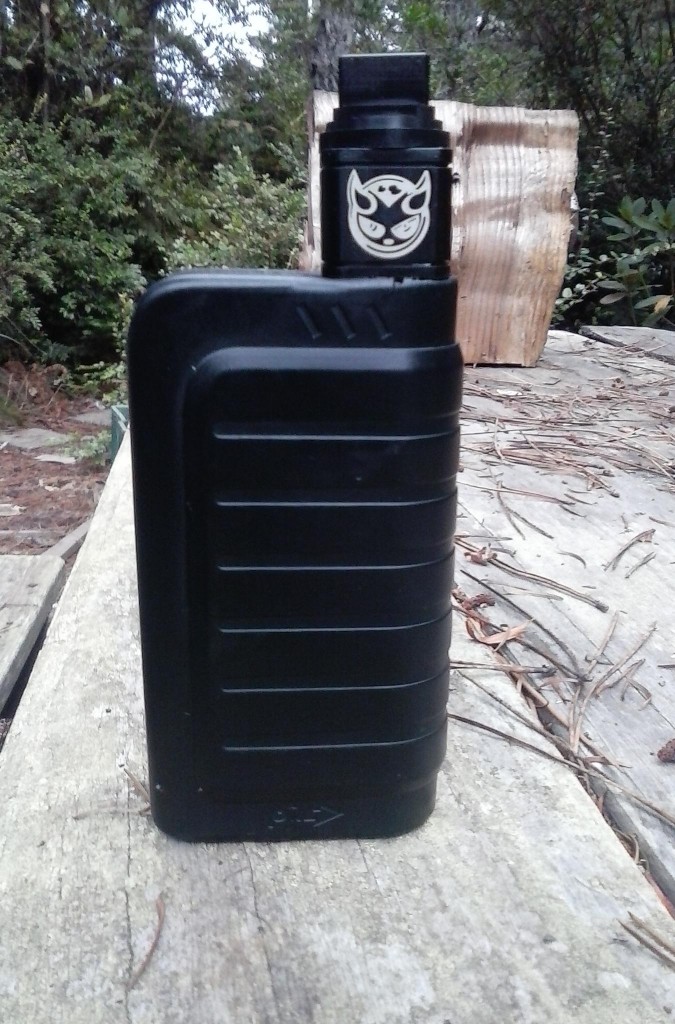 So, let me show you the interior design of it, and talk a bit about how all that works.

Here’s a shot of the deck. 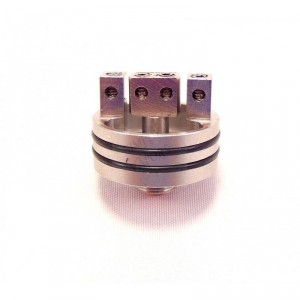 So, you see how they work. The posts have micro-grub screws. Smallest hex key they make I believe.

So the performance is verrrry cloudy with the cloud-chaser wide bore drip tip that comes with it, hoo boy.

I’ve also had some difficulty with centering. If you move the airflow to it’s more closed position, the coil deck becomes off-center. Not a huge deal.

Here’s a shot of what you get when u get it. 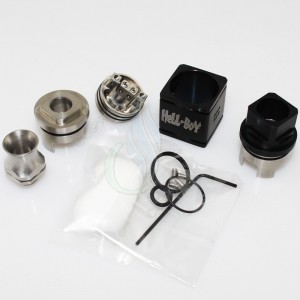 OK so, yes, its square, and the mouthpiece for cloud chasing is also square. Not to worry, human lips were made so they can fit on this square hole, as it were ! 🙂 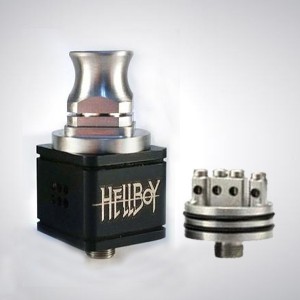 The airflow is controlled by the drip tip assembly itself, its got slotted pieces that either do or do not block off the airflow on the sides, u can see the holes there.

Not a bad RDA ! It’s got fairly large wire holes for higher  gauge wire, and has a considerably large juice well, about 4mm I’d say.

So, we can safely say the Hellboy works alright and easy enough to build on. Has less room than Velocity for coils, but offers a straight horizontal 4-hole post system which many find convenient.

In reply toVaperoski
Sunday, April 26th, 2020 at 10:05pm
@vaperoski @ElianaGolber YES, and why must they be salts ? Faster absorption ? That, I believe, only applies to the brain.
PLEASE elucidate on this !
View on Twitter
0
1

The Vapor Ninja @TheVaporNinja
Thursday, April 23rd, 2020 at 6:53am
Meanwhile, in France, they are testing #Nicotine on #Coronavirus patients.
Preliminary data is quite promising.
https://t.co/kYg6G8A1k0
View on Twitter
0
0

The Vapor Ninja @TheVaporNinja
Friday, April 17th, 2020 at 8:57am
The Damage to Vape Shops Deemed “Non-Essential”—And Their Customers https://t.co/Koa3mKQ2g1
View on Twitter
0
0

In reply toVapingIT, SPE, EEI
Saturday, February 8th, 2020 at 4:46pm
@Vapingit Fun fact, you can vape caffeine as well.
Warning: Caffeine is an addictive chemical, and, when taken in large doses, can be fatal.
View on Twitter
3
7

The Vapor Ninja @TheVaporNinja
Saturday, February 8th, 2020 at 4:19pm
Yes, I am a caffeine addict myself.
Can't function without it, tried to quit many times. https://t.co/l4dMA0VdWC
View on Twitter

VapingIT, SPE, EEI @Vapingit
Nobody in public health has cared about me enough to help me with my caffeine addiction.