Efforts to Raise Taxes on Electronic Cigarettes Persist in 2016

One year ago this week, ATR’s Patrick Gleason and I outlined the threat electronic cigarettes and vapor products faced during the 2015 state legislative sessions over new and higher taxes. At the conclusion of last year, state governments considered legislation to subject these new technology and tobacco-free products to excise or “sin” taxes in half the country and the District of Columbia. This was up from 15 the year prior, in 2014.

As we explained, “Where some see a new technology that is helping people quit smoking, cash-hungry politicians see a new target to tax.”

Contrary to claims by some, the fight to tax, and in many cases, regulate this new product category has never been about public health. In a piece for National Review, ATR president Grover Norquist and I outlined the fraud of such justifications for the prohibitionist movement against vapor products.

“The same people who spent years demonizing smokers and cigarettes turned around and gleefully pushed for new programs and spending projects with the revenue they were able to extract from consumers… Budgets, though, rely on this significant revenue stream. Here the fraud that has always been the public-health push for cigarette taxes is exposed, in their quest to tax e-cigarettes out of existence.”

These legislative threats have always been about protecting the government’s stream of sin tax revenue extracted from smokers. Every price increase on vapor products provides a reason for a smoker to not make the switch to healthier alternatives. This is exactly what some money-hungry legislators want.

So what about 2016? As state legislative sessions heat up, so too have efforts to raise taxes on electronic cigarettes. Below is a map showing which states currently subject the products to excise, or sin, taxes and states where legislation has been filed or defeated as well. Click here for a larger version of the map.  (Or, click the image. -ed.) 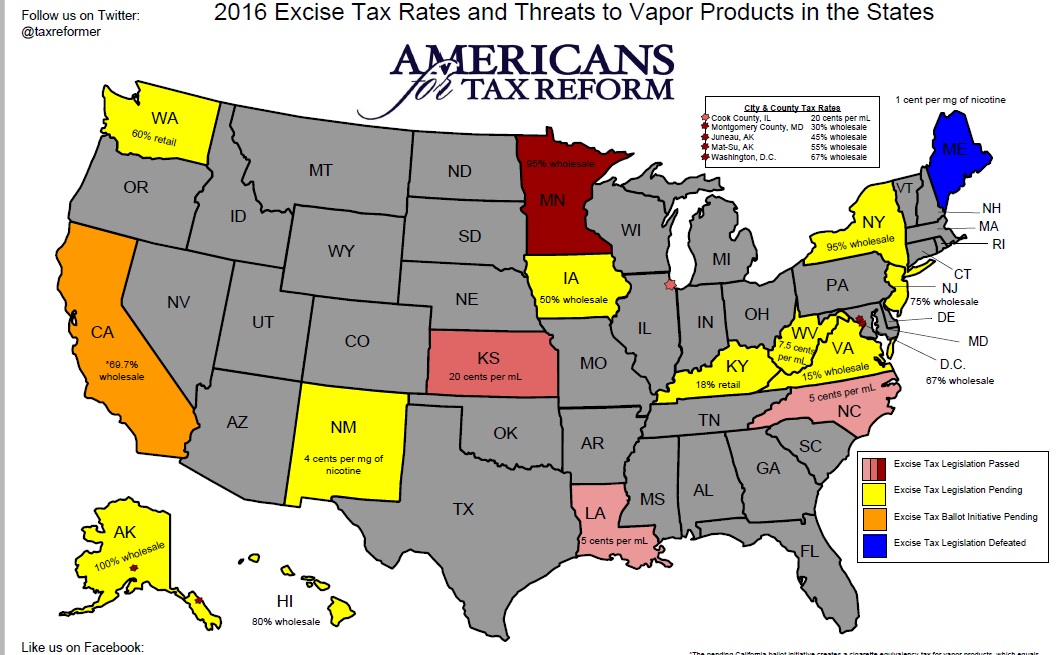 Legislation to raise taxes on electronic cigarettes has already been filed in Alaska, Hawaii, Iowa, Kentucky, New Jersey, New Mexico, New York, Virginia, Washington, and West Virginia. A ballot initiative is pending in California. More legislation is likely to be filed in the coming days and weeks.

Four localities also impose an excise tax on the products. They include Cook County, Illinois (20 cents per mL) Montgomery County, Maryland (30% wholesale), Juneau, Alaska (45% wholesale), ad Matanuska-Susitna, Alaska (55% wholesale). The mayor of Mat-Su actually vetoed the City Council’s tax increase, only to have it overridden on a 5-2 vote soon after.

Click here for a PDF version of the state tax map.