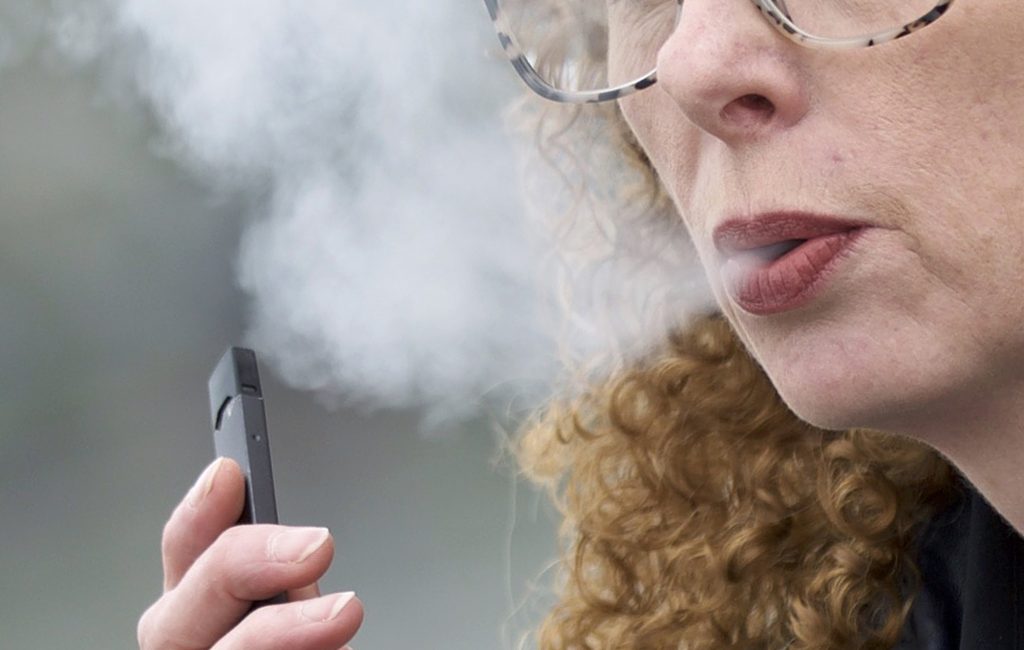 FILE – In this April 16, 2019 file photo, a woman exhales while vaping from a Juul pen e-cigarette in Vancouver, Wash. Schools have been wrestling with how to balance discipline with treatment in their response to the soaring numbers of vaping students. Using e-cigarettes, often called vaping, has now overtaken smoking traditional cigarettes in popularity among students, says the Centers for Disease Control and Prevention. Last year, one in five U.S. high school students reported vaping the previous month, according to a CDC survey. (AP Photo/Craig Mitchelldyer)

For months, the Department of Health and Human Services (HHS) has been telling us that young people are becoming hooked on flavored e-cigarettes. Now, we know that not only was HHS wrong, but they knew better and were outrightly dishonest to the American public.

After months of sitting on the information, the CDC finally released the National Youth Tobacco Survey (NYTS) results, and unsurprisingly, the responses confirmed that vaping flavors are not at the root of the youth smoking crisis in this country.

According to the published data, barely one in five youths cited flavors, such as mint, candy, fruit or chocolate, as the reason they picked up vaping products. In fact, they ranked flavors just as important to them than their ability to “do tricks” with their vaping pens, like blowing smoke rings or making shapes. The reasons cited by teens ahead of those two categories and leading the charge in youth usage of vaping products, at 55.3 percent, was simply that they were “curious about them.”

Until now, the FDA and the administration have been staunchly blaming flavored vaping products for the spike in youth use, claiming that flavors have made the products more attractive to teenagers. Even though these survey results prove the opposite to be true, this empirical evidence did not come out and did not remove culpability from flavored products.

The newly released data also begs the question of how long has HHS had access to these results. The flavor ban was first proposed by President Trump on September 11th, but before that, the FDA had publicly blamed flavors for the crisis multiple times.

These survey results prove that not only has the conversation been unjustly manipulated by the government, but the subsequently proposed flavor regulation has the power to kill thousands of American jobs, without sound reasoning to back up the decision. Banning flavors will undoubtedly and unfairly punish well-intentioned companies in the vaping space, force former smokers to return to old habits, and potentially catalyze a black market of illicit products.

Most importantly and less recognized, these regulations will without question cost American lives. Data shows that e-cigarettes are 95% safer than smoking tobacco products and, compared to prescribed alternatives, are almost twice as effective in getting smokers off traditional cigarettes – potentially saving millions of lives. We hope that HHS cares about these lives.

The FDA claims to pride itself on being a fact-driven organization that uses statistics and hard data to come to conclusions. If that is truly the case, then the current data, combined with former data showing that kids overwhelming rank menthol, a “non-flavor” as their favorite, reveals the hard-and-fast facts that they have been ignored and shielded from the public.

The government bureaucracy has kept the American public in the dark in favor of politics. Not only that, but it turned out to be terrible politics, considering a flavor ban has considerable power to hurt Trump’s reelection, with polls showing 11 percent of Trump’s supporters are less likely to vote for a candidate who backs a flavor ban.

The needless domino effect of consequences that would result from this blatantly anti-business regulation would be catastrophic for the country. Going forward, we can only hope the administration leans on facts. Rather than haphazardly picking winners and losers in this situation, it should not continue along the path toward a nationwide flavor ban.

If safety is a concern to the FDA, then Americans deserve better.

Steve Pociask and Krisztina Pusok are with the American Consumer Institute, a nonprofit educational and research organization. For more information, visit www.TheAmericanConsumer.Org or follow us on Twitter @ConsumerPal.