California’s voters can save the state from ban-happy lawmakers 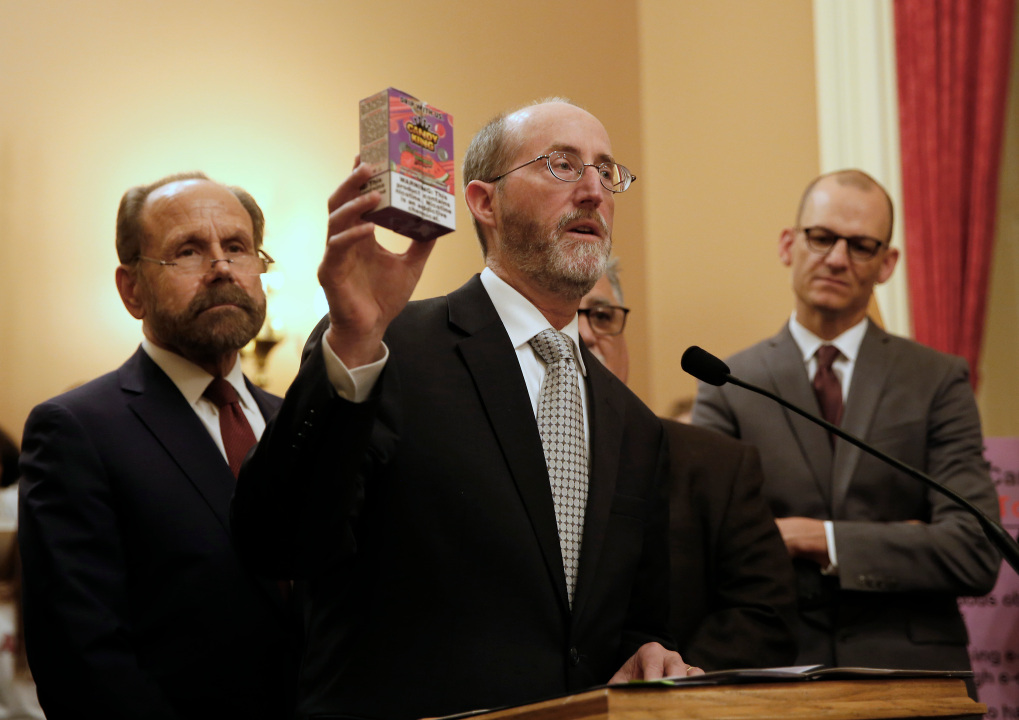 California state Sen. Steve Glazer, D-Orinda, displays a box of flavored e-liquid for vaping as he discusses his support for a measure by state Sen. Jerry Hill, D-San Mateo, left, to ban flavored tobacco products, during a news conference, Wednesday, March 27, 2019, in Sacramento, Calif. If approved by the Legislature and signed by the governor, Hill’s measure to ban the sale of flavored tobacco products in stores and vending machines in California,. At right is Assemblyman Kevin McCarty, D-Sacramento. (AP Photo/Rich Pedroncelli)

Thanks to a mammoth effort of signature gathering undertaken last year amidst the height of the COVID-19 pandemic, California voters will have the final say on whether or not the state embarks on a new era of prohibition. Last year, state lawmakers passed a bill banning flavored tobacco products. But after getting enough signatures to qualify for the statewide 2022 ballot, the decision over banning flavored tobacco products will be left to California voters.

In the 2022 election, Californians will decide whether to ban the sale of nearly all flavored tobacco products, including menthol cigarettes, flavored e-cigarettes, and smokeless tobacco. Lawmakers exempted pricey cigars, hookah, and pipe tobacco products from the ban.

California wouldn’t be the first state to enact such a ban. In June 2020, Massachusetts became the first state to implement a flavored tobacco ban. At the time, supporters of the ban claimed tobacco consumption would plummet and fears of black markets and cross-border sales were overblown. With fewer smokers, Massachusetts would also save money by reducing health care costs, they argued.

But reality soon dispelled such optimism. From the time the ban was implemented in June 2020 through November 2020, Massachusetts’ cigarette excise taxes fell 24 percent.  However, cigarette sales in neighboring Rhode Island and New Hampshire rose 18 percent and 29.7 percent, respectively, compared to the same period in 2019.

Massachusetts lost $62 million in cigarette excise tax revenue in the first five months of its ban. And these figures underestimate Massachusetts’ total losses because they do not account for the state’s lost sales of flavored e-cigarettes, smokeless tobacco, or cigars. According to the Tax Foundation, prohibition could cost Massachusetts a total of $120 million in the 2020—2021 fiscal year.

These results are important not just because they demonstrate an immediate economic impact from the state ban, but due to cross-border trade and substitution to non-menthol cigarettes, any health benefits are likely to be severely limited. In other words, the loss in tax revenue will not be offset by lower health care costs.

Menthol and non-menthol cigarettes are equally dangerous so one has to ask wonder why policymakers have targeted and banned the product preferred by Black smokers while the cigarettes used by whites can stay on the shelves. When Congress debated a similar flavor ban last year, the American Civil Liberties Union and other civil rights groups also warned banning flavored tobacco products would disproportionately impact people of color, trigger unnecessary criminal penalties, and prioritize criminalization over public health and harm reduction efforts. They’re right.

California was at the forefront of recognizing that the war on drugs was a moral and empirical failure. And yet, the legislature has eagerly committed itself to a new war on flavored tobacco. Thankfully, voters will have the final say.

(This article was originally published here.)